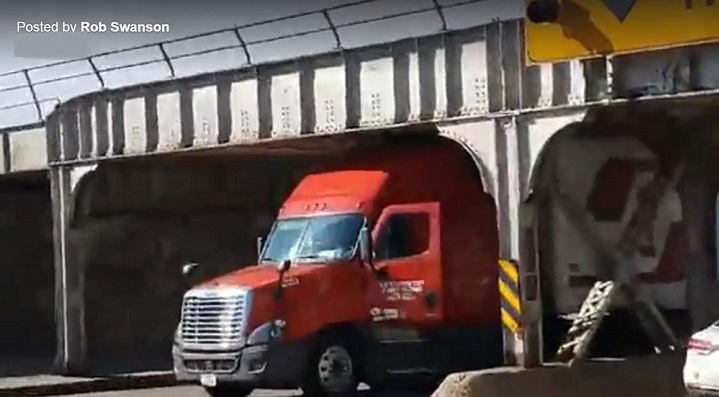 PIERRE, S.D. (DRG News) – For the second time in less than a week, a driver from Texas got the semi he was driving caught under the a train bridge along a major route of travel in Pierre.

Information from the Pierre Police Department says 66-year-old Hank Wiley of Ennis, Texas, disregarded posted truck route signs and turned from Sioux Avenue to travel north on Pierre Street. Wiley attempted to travel underneath the train viaduct which resulted in his semi-tractor/trailer colliding with the bridge and becoming stuck about mid-morning Monday.

Wiley told a responding officer said he saw the over height detour signs, but because the warning lights weren’t flashing he proceeded forward. Pierre city crews were called to examine the warning system and found it was not functioning properly. No citation was issued and officers were on scene for approximately almost 1.5 hours.

Last week (May 7), 48-year-old Dewayne Brantley of Houston, Texas, told a responding Pierre Police officer he ignored height limit warning signs and followed directions from his GPS. He was cited for a truck route violation.