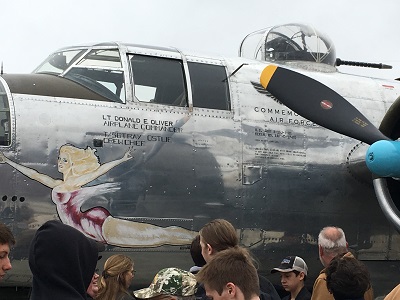 PIERRE, S.D. (DRG News) – In commemoration of the 77th anniversary (April 18, 2019) of the Doolittle Raid during WWII, a B-25 bomber is making stops across South Dakota this week– including in Pierre Wednesday morning.

John Mollison is the communications director for the South Dakota Air and Space Museum. He says the Doolittle Raid in 1942 was the defining moment of America’s involvement in WWII.

The two South Dakotans on the raid’s roster were Henry Potter from Pierre and Don Smith from Oldham. Potter flew with the lead bomber flown by Doolittle. Smith was the pilot of the 15th bomber.

Hundreds of people of all ages came to the Pierre Regional Airport to see the B-25 bomber and Mollison says response at all of the stops has been phenomenal.

He says the vast majority of the WWII B-25 bomber touring the state is still original.

In the dark days of post Pearl Harbor, President Roosevelt requested a retaliatory attack on mainland Japan. Lt. Col. Jimmy Doolittle of the United States Army Air Forces was selected to lead the mission which consisted of 16 B-25 bombers launched from an aircraft carrier, an unprecedented tactic at the time.

The B-25 bomber flying across the state bears the markings of an actual WWII combat veteran, seeing over 130 missions. The bomber is maintained and flown by the Minnesota Wing of the Commemorative Air Force, a group of dedicated aviation enthusiasts that work to keep historic aircraft in the air and accessible to the public.

The last of the 80 Doolittle Tokyo Raiders, Retired Lt. Col. Richard “Dick” Cole, died last week (April 9) at the age of 103. A memorial will be held for him in Texas at the Joint Base San Antonio-Randolph Thursday– the 77th anniversary during WWII.

The plane also made stops at Sioux Falls, Mitchell, Ellsworth Air Force Base and Rapid City.