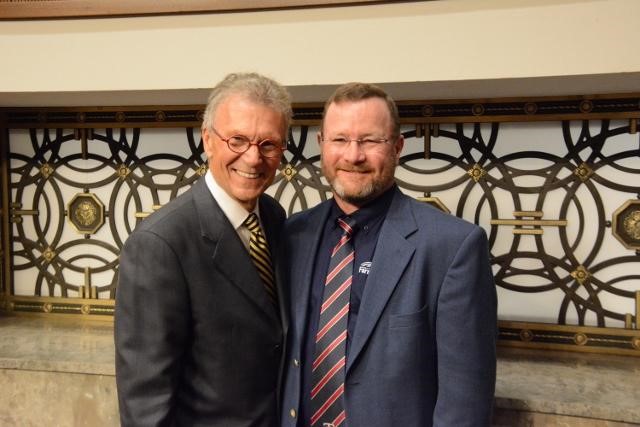 “Senator Daschle is a longtime friend to South Dakota’s family farmers and ranchers. For everything he did as a Senator, and all he does today as an ethanol advocate, we honor him,” says Doug Sombke, SDFU President.

Daschle’s connection and service to agriculture began in his childhood. “As a young teenager, I spent my summers working on my aunts and uncle’s farms, and even aspired to be a farmer during those years,” he shares.

His passion for South Dakota’s agriculture industry and its people is evidenced throughout his career by many of his actions. “When I got elected to Congress, given agriculture’s importance to South Dakota and my great respect and admiration for farm families, my decision to seek a seat on the Agriculture committee was an easy one. I made the same decision when I was elected to the Senate,” he explains. “There is no more important profession in society than that of a farmer. Our public policy ought to reflect that.”

To emphasize this fact, Daschle shares a story he borrowed from a former Chair of the House Agriculture committee, Texas Representative, Kika de la Garza.

“Representative Kika de la Garza used to tell a story about a time when he was given the opportunity to spend a day on a nuclear submarine. As they cruised under the surface of the sea, he asked the captain how long the submarine could stay under water. The captain replied, “As long as we have food for our crew.”

“How long can civilization survive on the planet? As long as we have enough food,” Daschle says.

Adding value to agriculture commodities, Daschle adds, is important to sustaining South Dakota’s agriculture. “The ethanol industry is a prime example of what value-added agriculture means to our farmers and our state,” he says. “There is a direct correlation between adding value and adding agricultural viability. As important as all agricultural commodities are, it matters a great deal what we do with them. Farmers are invaluable producers of food, feed, fiber and fuel. But we must continue to find ways to enhance the value of each of these categories rather than be content to simply sell our crops to others to do so. Enhancing value not only creates more profitability on the farm, it has great potential to create jobs and economic viability for our rural communities.”

In 1978, Daschle was elected to the U.S. House of Representatives, where he served for eight years. In 1986, he was elected to the U.S. Senate and was chosen as Senate Democratic Leader in 1994. Senator Daschle is one of the longest serving Senate Democratic leaders in history and one of only two to serve twice as both Majority and Minority Leader.

Since leaving the Senate, Senator Daschle has remained an active and learned voice among policymakers, emerging as a leading thinker on climate change, food security and renewable energy policy. He serves on both advisory and governing boards of a number of corporate and non-profit organizations and as a Commissioner on the Bipartisan Commission on Biodefense.

Today, Senator Daschle is the Founder and CEO of The Daschle Group, a Public Policy Advisory of Baker Donelson. The Daschle Group is a full-service strategic advisory firm that advises clients on a broad array of economic, policy and political issues.

The 2019 SDFU Ag Ambassador emphasizes the importance of family farmers and ranchers working together. “In a democratic republic, strength comes in numbers. I remember once, long ago at a county fair, watching a man make a rope. He noted that a single strand of his rope could be easily broken but woven together that rope was virtually unbreakable. That is true for organizations, too. Woven together, Farmers Union members are far stronger than when they stand alone. Together they have shown their strength in South Dakota and in Washington. And today, they are needed more than ever.”