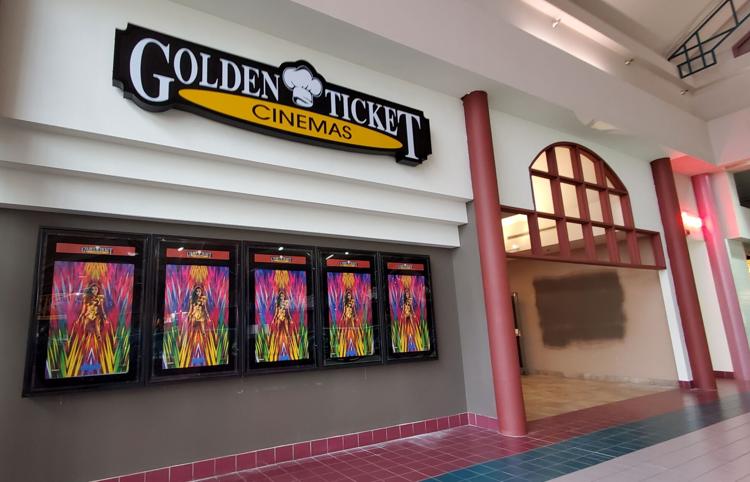 Golden Ticket Cinemas is set to open Friday, Dec. 18. The new theater in Uptown Aberdeen will offer an upgraded menu along with recliner seats. (Photo courtesy of Aberdeen News)

ABERDEEN, S.D. (By Trent Abrego Tabrego@gannett.com) – Aberdeen residents who are looking for a luxury theater will not have to wait any longer.

Golden Ticket Cinemas, which is located in Uptown Aberdeen (formerly known as Aberdeen Mall), announced in a Facebook post that the theater will be opening Friday.

The theater has nine auditoriums, but during opening weekend five will be airing movies.

“Honestly, there’s no need to open nine auditoriums right now because there’s not a lot of product in the marketplace. Studios are holding back a lot of film product right now, understandably,” Bloemeke said.

“(Recliners) are the biggest difference, we did some cosmetic changes as well; a few little bells and whistles,” Bloemeke said.

With the upgraded recliners, the auditoriums have become more intimate, Bloemeke said. Each recliner is equivalent to the space of two normal seats; cutting the capacity levels in half. When Golden Ticket Cinemas opens, the max capacity will at half capacity, due to company policy developed in response to COVID-19.

“It’s going to be a little more of an intimate environment which is probably good for the times we’re living in right now,” Bloemeke said.

Along with the upgraded recliners, Golden Ticket Cinemas replaced poster cases with digital displays, repainted and installed a new menu board.

“It wasn’t a bad theater, it was just a little bit tired and it hadn’t been given any upgrades in a long time, and that’s what people really wanted was to give it a breath of fresh air,” Bloemeke said. “Hopefully we’ve given the folks in Aberdeen a reason to keep coming to their hometown theater.”

Golden Ticket Cinemas offers an online ticket ordering system — where moviegoers can hand select their seats. Moviegoers can purchase tickets at Gtcinemas.com, or Fandango. Movies, tickets and showtimes are not presently available on the site, but will be available soon, according to post announcing the Friday opening.

On Tuesdays, the theater will be offering $5.50 tickets and popcorn and drinks for $2. Gift cards are also available for purchasing.