PIERRE, S.D.(HubCityRadio)- On Wednesday the South Dakota House and Senate approved the redistricting map that will be used going forward for the next 10 years.

After the sparrow map gained approval from the House Affairs Committee, it moved to the main floor.  Representative Taffy Howard of Rapid City offered a motion to not accept the recommended changes.

Howards explains why she did it.

Representative Nancy York of Watertown opposed the motion because she felt a compromise was reached by the House Affairs Committee.

Representative Fred Deutsch of Florence also opposed it because he was not willing to take a risk.

House moved on to debate the map itself.  Representative Drew Dennert explains his opposition to the map.

Dennert talks about population deviation of the map and feel the map will be challenged in court.

Dennert talks about the map not following the will of the people.

Dennert gave the example of the public forum that took place in Aberdeen.

Senator Mary Duvall of Pierre chaired the Senate Redistricting Committee and thanked all of the Senators that helped develop the new map.

Senator Red Dawn Foster of Pine Ridge though her district, 27 could use some work.

The Senate passed the map on 30 to 2 vote.  The bill now moves on for a signature from Governor Kristi Noem.

Here’s a look at the sparrow map: 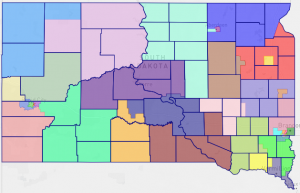