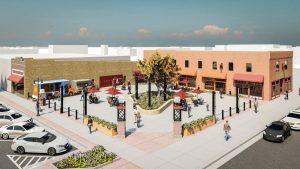 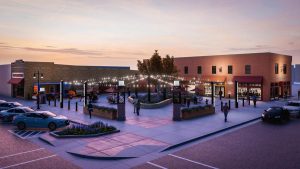 The Aberdeen Development Corp. has announced a $2.5 million plan to create a new plaza area where Malchow’s Home Furnishings previously was on South Main St. Construction is expected to begin later this summer. Courtesy renderings

ABERDEEN, S.D. (HubCityRadio.com) – Local leaders shared their thoughts on the new Malchow’s Plaza to be located in downtown Aberdeen.

The $2.5 million plaza will be located at the site of the former Malchow’s Home Furnishings location, which was destroyed in a fire last October.

The businesses that will be housed there include the Aberdeen Area Convention and Visitors Bureau, South Dakota Small Business Development Center, Aberdeen Development Corporation, Dakota Broadcasting and a business called The Market on the Plaza which will feature food, beverages and local and state made products.

Mike Bockorny, CEO of the Development Corp., told the Aberdeen City Commission Monday night that work has already started and that plans call for the plaza to be up and running next spring.

Gail Ochs, President of the Aberdeen Area Chamber of Commerce, talked about the usefulness of having most of the promotional venues all in one convenient location.

Casey Weismantel, Executive Director of the Aberdeen Area Convention and Visitors Bureau, is excited about the prospects of the new plaza.

Shelley Westra-Heier, President of the Aberdeen Downtown Association, said the plaza will fulfill a need for the city and called the site the perfect location.

Brodie Mueller, who along with Carly Pochop, will own The Market on the Plaza. He talked about the items that will be available at the business.