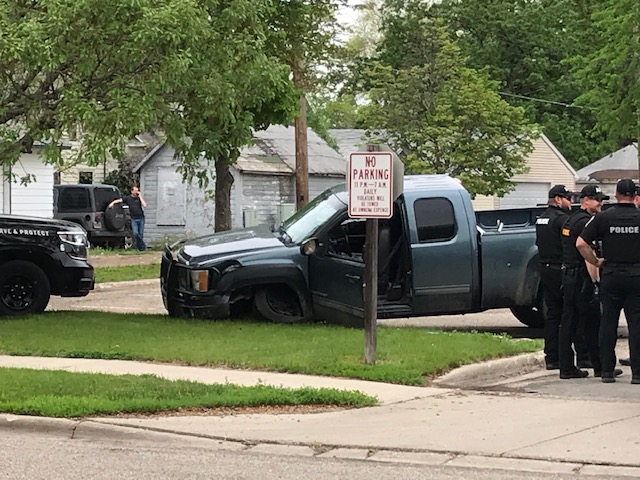 ABERDEEN, S.D. (APD Facebook Post) – On Monday, May 25, at 1:47 p.m. a citizen contacted Brown County Communications with concerns about a possible drunk driver. The citizen reported that they followed a GMC pickup on 6th Ave SE and the vehicle was swerving back and forth between lanes. A few minutes later, an APD officer located the vehicle. Near the intersection of S Weber St & 1st Ave SE, the officer attempted to initiate a traffic stop. The pickup fled westbound on 1st Avenue. The pickup ran a red light at the intersection of 1st Ave SE & S Dakota St and continued westbound at speeds around 50 mph.

The pickup continued westbound until turning northbound on Kline St. After turning, the pickup accelerated rapidly and the pursuit was terminated by the APD. Shortly after the termination of the pursuit, the pickup attempted a left turn on 4th Ave NE. The vehicle left the roadway and collided with a tree and the curb. The crash resulted in front end damage and heavily damaged the front left wheel.

The driver refused to comply with officers’ instructions and continued to attempt to flee. Officers broke out a window on the vehicle and Tasers were deployed in an effort to stop the driver. The driver was taken into custody.

There were no injuries due to the pursuit and crash. The only vehicle that received damage was the pickup involved in the pursuit.

The driver was identified as David Michael Jorgenson (60 years old). He was charged with DUI 2nd Offense, Aggravated Eluding, Hit & Run, Failure to Stop at a Stop Sign, Speeding, & Driving Under Suspension.