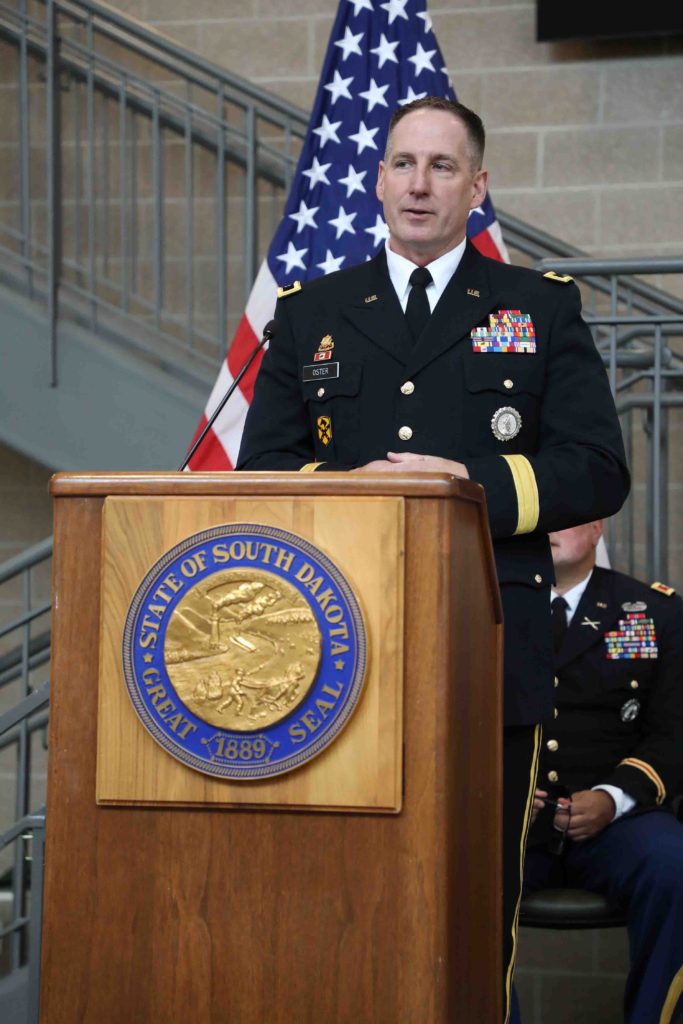 With the promotion will come a new duty assignment as the assistant adjutant general of the South Dakota Army National Guard. Oster will take responsibility from Brig. Gen. Tom Croymans, who will retire after 43 years of military service. Oster’s official appointment to the position will take place at a later date.

“Promotions at this level are more about the people and opportunities you have had on your way here,” said Oster. “So many things have to line up to get these opportunities, and when they do you just hope to be qualified and ready to go.”

“I could not be more excited about this, and I’m absolutely honored by the privilege to serve in such an important capacity for such an amazing organization,” Oster added.

Guest speaker Maj. Gen. Tim Reisch, adjutant general for the SDNG, expressed his confidence in Oster to maintain the relationships and readiness for South Dakota.

“Leaders, especially at the general officer level, are chosen based on potential not on achievements,” said Reisch. “General Oster is a great leader and will serve the South Dakota National Guard well.”

Oster outlined many goals that he has after assuming his new position.

“One of my goals is to re-establish effective use of mission command re-establishing mutual trust, allowing leaders at all levels the ability to take prudent risk, exercise disciplined initiative and command at the appropriate level,” said Oster. “Clearly we will continue to focus on readiness, and I believe by creating clear objectives, setting the expectation of excellence.”

Oster is looking forward to the many challenges and opportunities that come with this promotion and his position of assistant adjutant general.

“Knowing that you serve each and every Soldier in the Army National Guard is an amazing responsibility,” said Oster. “I am excited to take that on and work as an advocate to ensure our Soldiers their families, and their employers have what they all need to continue to level of excellence that has become the standard in our organization.

“The Soldiers of the South Dakota Army National Guard have my trust, loyalty and complete commitment to them,” continued Oster. “I will spend every day in this position earning the same from them.”

Oster began his military service in 1986 enlisting as a combat wire installer with Battery A, 1st Battalion, 147th Field Artillery in Mitchell. He received his commission through the Officer Candidate School program in 1990.

He earned his Bachelors and Master of Science degrees from South Dakota State University and is a graduate of the U.S. Army War College.

Oster has served at nearly every staff level and command position throughout his career. Oster has commanded the 665th Maintenance Company, 727th Transportation Company, Recruiting and Retention Battalion the 152nd Combat Sustainment Support Battalion and the 109th Regional Support Group.

Oster has also completed two tours of duty: one to Iraq in 2004-2005 with the Rapid Fielding Initiative, and his second tour to Afghanistan with the 152nd CSSB in 2013.