PIERRE, S.D. (DRG News) – Cheyenne River tribal members and other opponents to HB1117 (the so-called riot boosting bill) will be rallying around the State Capitol building in Pierre at 1pm (Central) today (Tuesday).

According to information from the organizers, the rally is to show legislators and Gov. Kristi Noem what peaceful, purposeful assembly looks like and to bring awareness to the damaging impact the Keystone XL Pipeline may have.

South Dakota House lawmakers are scheduled to vote on HB1117 this afternoon. 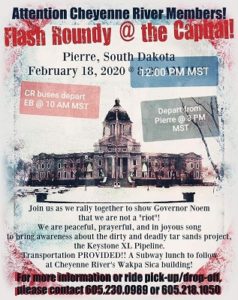 The rally is organized by a grassroots group of people, but you can contact Candi Brings Plenty, the ACLU’s indigenous justice organizer, for more details at 646-599-0959.