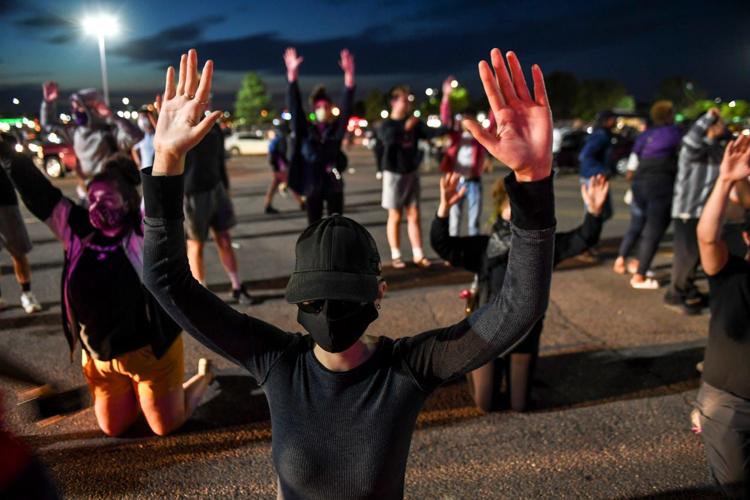 Protestors kneel while the police threaten to launch tear gas on Sunday, May 31, 2020 in Sioux Falls, S.D.

Dozens of police units descended on the Empire Mall after protesters began to congregate there and throw rocks at police, according to a Tweet from the Sioux Falls Police Department. Protesters had dispersed as of 11 p.m.

“The only exception during this order is for people going to and from work and seeking emergency services,” the order said.

The protest, which started  in downtown Sioux Falls at 4:30 p.m., weaved throughout central Sioux Falls and headed westbound on 41st Street before arriving at The Empire Mall shortly after 9 p.m.

Several businesses in the area of the Empire Mall had windows damaged, though protesters were starting to disperse away from the Mall at 10:30.

Gov. Kristi Noem said they welcomed the peaceful protest, but once it turned violent, the South Dakota National Guard was staged and ready to be activated. The National Guard was in downtown Sioux Falls within minutes, which freed up local authorities downtown to respond to the Empire Mall area, Noem said late Sunday night.

“Rioting and looting will not be tolerated in South Dakota,” Noem said.

Noem said the number of people who traveled to South Dakota on Sunday is unknown.

The Highway Patrol are also located throughout Sioux Falls, but she declined to say how many officers were in Sioux Falls due to security reasons.

Other National Guard units are staged and ready to be activated in other parts of South Dakota on Sunday night if unrest occurs elsewhere, she said. The state is prepared for unrest in other cities in South Dakota, but Noem said she doesn’t expect the unrest in Sioux Falls to spread to other cities in the state.

Sioux Falls Mayor Paul TenHaken in a Facebook Live event on the Sioux Falls Police Department page said the events at the mall “tarnished” what was supposed to be a peaceful day acknowledging the death of George Floyd and to “advance the conversation” around race and violence.

“That is not what’s going to be remembered based on this evening,” he said.

He encouraged parents to get their kids home, saying he was saddened to see so many kids at the mall.

“We have videos of your children committing criminal acts. Your kids need to get home. This is not a joke. This is serious,” TenHaken said.

At the time of TenHaken’s statement, he wasn’t sure about civilian or police injuries. He reminded the public that a curfew had been enacted and that it would be enforced.

“Get your rear ends home,” he said.

Sioux Falls Police Lt. Jon Thum on scene said there were “many” officers hit by rocks and that at one point gun shots went off near TJ Maxx, where protesters had begun throwing things at windows.

“We need everybody to go home,” he said. “Remember Sioux Falls is a great city, full of great people. We just need to let this cool down.”

“South Dakota hoped for the best but prepared for the worst. We activated the National Guard the minute things turned violent in Sioux Falls,” said Governor Noem. “This is a specialized unit that is prepared for situations like this. We take protection of rights very seriously, including the right to peacefully protest, but rioting and looting will not be tolerated in South Dakota. Make no mistake, mob rule and violence do nothing to honor the memory of victims.”

Protests peaceful earlier in the day

A crowd of well over 1,000 protesters weaved through Sioux Falls streets on Sunday night with chats of “Black Lives Matter,” “I can’t breathe” and “No Justice, No Peace” after a “March for George Floyd” was held.

The crowd stretched several blocks at one point, and Sioux Falls Police blocked traffic for them.

As of 8 p.m., there appeared to be no major events or altercations.

At the beginning of the protest, chants of “no justice, no peace” spread through the crowd. It was interspersed with a “say his name/George Floyd” chant.

After 20 minutes at Van Eps Park, protesters moved to the courthouse across the street before ending at the Sioux Falls Police station. The protest was peaceful, and as of 6:30 p.m., parts of the crowd were walking in a separate protest in downtown Sioux Falls.

Several speakers addressed the crowd about the need to hold police accountable and for working to fix race issues in the country.

Vaney Hariri, as he spoke, urged the crowd to not leave the protest without contact information from another person, and said that white protesters there had extra work to do.

“If you love your black friend,” he said, “show up”

“This is not something that will be fixed by community meet and greets,” said Laura Renee Chandler, director of the South Dakota African American history museum.

What’s needed, she said, was accountability.

Meanwhile, several downtown businesses were removed  movable items in front of their store fronts in preparation for the protest in case it became violent, such as what happened in Fargo on Saturday ngiht.

“Prepare for destruction and hope for peace,” said Pat Klein as he helped the State Thertre move magazine racks inside ahead of planned protests downtown tonight.

According to a now-deleted tweet from the Sioux Falls Chamber of Commerce, the organization has been told that buses were en route from Fargo for Sunday’s downtown march with out-of-state protesters. The chamber urged businesses to bring in street furniture ahead of the march.

We’re being told that buses are en route from Fargo for today’s march downtown. DT businesses – please bring in any furniture, signs, etc. that could possibly be thrown through windows. Let’s keep our city safe and peaceful!

“We don’t know what’s going to happen,” Spaeth said. “We’re preparing for the worst and I hope it’s not anywhere close to that.”

Mayor Paul TenHaken issued a statement Sunday morning that the City was working with the March for George Floyd protests to ensure it stayed peaceful.

“I appreciate the organizers’ communication and efforts to hold a meaningful and peaceful event,” he said.

Gov. Noem: Riots and looting ‘will not be tolerated in South Dakota’

TenHaken added that the city has a plan if the event moves in an “unlawful direction.”

The Sioux Falls Police Department issued a statement saying it supports the protest.

“Today is Sioux Falls’ opportunity to proudly show the world the great example of how community and police can work together and do things with grace and peace, while respecting all those involved,” the statement read.

Noem: Rioting and looting ‘will not be tolerated’

Gov. Kristi Noem said she takes people’s rights seriously, including the right to peacefully protest, but violence won’t be tolerated in South Dakota.

”Make no mistake, mob rule and violence do nothing to honor the memory of victims,” Noem said in a statement. “If asked, the state stands ready to assist local authorities to ensure everyone’s rights are protected. Rioting and looting, like we’ve seen in other cities and states, will not be tolerated in South Dakota.”