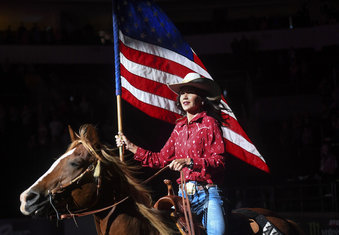 SIOUX FALLS, S.D. (AP) — South Dakota health officials say they have not seen an uptick in community spread of the coronavirus after thousands of people gathered for Independence Day celebrations in the western part of the state.

Gov. Kristi Noem has encouraged public gatherings in recent weeks. She held an outdoor fireworks celebration without social distancing at Mount Rushmore on July 3. She also pushed for a Professional Bull Riders competition that allowed fans into a Sioux Falls arena this weekend. She even appeared at that event on horseback, wielding the American flag. South Dakota’s report of 25 cases was one of the lowest since April.