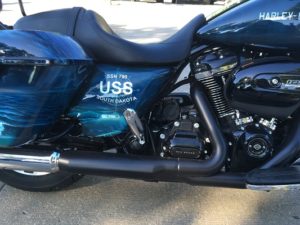 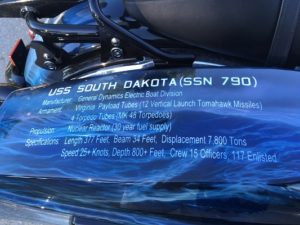 He says the sailors are specially trained for working in a submarine.

The sailors are taking turns riding the Commemorative USS SOUTH DAKOTA 2018 Harley-Davidson Street Glide from Sioux Falls to Sturgis. The bike will be on display in the Sturgis Motorcycle Museum. Any sailor assigned to SSN 790 is allowed to check the bike out and ride it anywhere in South Dakota.

On April 13, 2012, the Secretary of the Navy announced that U.S. Navy submarine SSN 790 would be named in honor of the State of South Dakota. Carrying a crew of 14 officers and 117 enlisted servicemen, USS SOUTH DAKOTA (SSN 790) will be armed with two Virginia Payload Tubes (VPT), each capable of holding six vertical launch Tomahawk missiles that can strike land targets up to 1,240 miles away. The ship is powered by a nuclear reactor, offering an unlimited source of fuel lasting the life span of the ship, which is projected to be over 30 years.