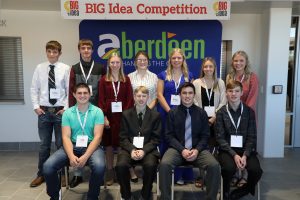 ABERDEEN, S.D.(Press Release)  The 2022 BIG Idea Competition marked a milestone with new opportunities for high school students.  A total of 277 entries were received involving over 357 students from 54 schools. For the first time in competition history, a separate virtual competition was held for finalists outside of South Dakota. These were judged by a separate judging panel and separate prizes awarded. The 2022 event wrapped up Wednesday, December 7, at Northern State University (NSU) with the in-state judging taking place followed by the Awards Ceremony were winners from both competitions were announced along with four special category awards.  Nearly $50,000 in cash and scholarships were awarded. The livestream link for the event can be found on the BIG Idea Facebook page (@BIGIdeaSD).

Third place was awarded to Punch Out, by Cole Bisbee of Groton High School. Punch Out Tool Company, designed Punch Out, a spring-loaded, hand-held punch specifically designed for working on haybines. The Punch Out is best suited for punching out broken sickle teeth on haybines, where it is hard to fit a hammer. It can be used around the farm and at home too. Third place prizes include $250 cash, $1,500 NSU scholarship, $1,000 Presentation College scholarship and $1,000 South Dakota School of Mines & Technology. Punch Out also won the Agriculture Innovation Category award with a $500 cash prize and $500 scholarship from NSU. This year, 33 entries were judged in the Agriculture Innovation category, sponsored by the South Dakota Agriculture Foundation.

Freeze Dried Fun, by Beau Price of Aberdeen Roncalli High School, won the Marketing Design portion of the competition. The Marketing Design competition is an option for students to create an ad for their business idea. The award is sponsored by McQuillen Creative Group which donates $500 cash and Northern State University donates a $500 scholarship as well. This year, 176 entries were judged in this category.

Countryside Living, by finalists Kamryn Anderson, Kendyl Anderson and Kiah Koch from Warner, also won the Wellness Category award with a $500 cash prize and $500 scholarship from NSU. This year’s Wellness Category, sponsored by Sanford Health, had a total of 50 qualifying entries.

Staging and Designing Success by Blaize Larson from Webster High School won our newest special category, Hometown Business. The award is sponsored by the South Dakota Retailers Association which donates $500 cash and Northern State University donates a $500 scholarship as well. This year, 120 entries were judged in this category.