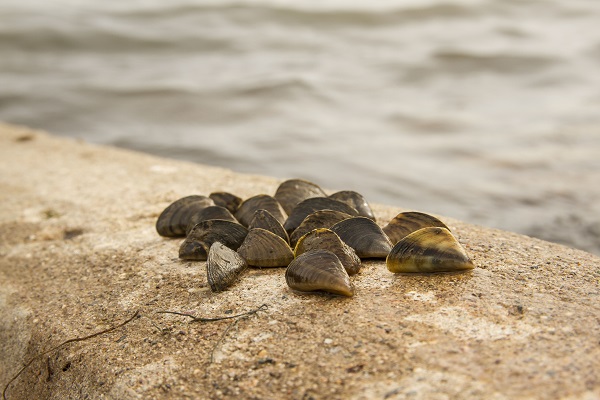 PIERRE, S.D. (DRG News) – The South Dakota Department of Game, Fish & Parks has confirmed the presence of zebra mussels in the lower region of Lake Sharpe.

GFP Area Fisheries Supervisor Mike Smith at Fort Pierre says the mussels were initially discovered at the lower end of Lake Sharpe. He says additional sampling efforts confirmed adult zebra mussels are present in multiple areas in the lower portion of the lake.

He says Lake Sharpe is now classified as infested for zebra mussels and precautions must be taken to prevent spreading them to other waters.

Smith says although considered an invasive species, they don’t anticipate zebra mussels will ruin the fishing on Lake Sharpe.

Reproducing populations of zebra mussels were discovered in Lewis and Clark Lake and the Missouri River below Gavins Point Dam at Yankton in 2015. For more information on zebra mussels and other aquatic invasive species, visit sdleastwanted.com.

Every time they leave the water, boaters and anglers should:

Completely draining a boat is the first step in making sure invasive species are not transferred to other waters. Boaters who have used any water body should clean their boats with hot water (140 degrees) or let them completely dry for at least 5 days before launching in other water bodies.

Zebra mussels can produce up to one million eggs per year, rapidly colonizing new waters. The larval stage of zebra mussels, called veligers, are smaller than the width of a human hair and nearly impossible to detect due to their size. This makes South Dakota’s boat draining and fish and bait transportation laws even more critical in stopping the spread of this species. Veligers float in water for up to a month. This means they can be easily transported to new water bodies in even small amounts of water remaining anywhere in a boat, bait container, or gear used during a fishing or boating trip. While it is difficult to determine exactly how mussels entered Lake Sharpe, all boaters and anglers can help prevent introducing the mussels to new waters.